If I have said it once I have said it a thousand times: "Talk to the old forks before it is too late and never, never toss out any research you collect along the way."  Maybe I should throw in, "Leave no stone unturned." And "not every notation is fact until you can prove it so." 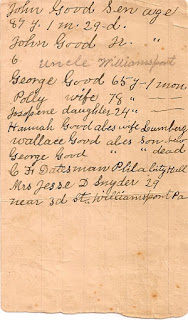 Here is a handwritten note given to me by Arvilla Good Stevens of Lower Mt. Bethel twp., Northampton Co., PA several years ago before she passed away in 2000.  The note was written by Henry Good (1841-1919), Arvilla's grandfather.   It is a wealth of information about the Good family.  First, Henry records that he believes his grandfather, John Good Senior, lived to the age of 87 years, 1 month and  29 days.  John, Sr. was born in Nockamixon on Feb. 2,  1787,  the son of Henry Good and his wife Catherine Schick. His birth is recorded in the Nockamixon, Bucks Co., PA  Church records.  Henry's note is a good place to start to learn more about Old John's demise.  What is missing is where he is buried, a fact I have been searching for for many years.

Next, Henry put down the name "John Good, Jr."  who was his father and then he has written "Uncle Williamsport".   Under that Henry wrote "George Good  65 y - 1 mon".  This is John Good, Junior's brother George (therefore Henry's Uncle George) who was born Sept. 13, 1810 in Mount Bethel twp., and whose record of baptism is recorded in the Upper Mt. Bethel Church records.  Combining these facts, a death date of October 13, 1875 can be calculated for George. The rest of the persons listed on the little slip of notepaper seem to be members of the family of George and Polly, his wife.

Using this information I was able to find a cemetery record for George on Find A Grave.   And this is where the fun began.  George is buried at Wildwood Cemetery in Williamsport, Lycoming County, Pa.  The entry lists several children and the wife of George, Mary (who is listed above as Polly, a popular nickname for Mary back in the day). These are names that match what was written almost 100 years ago by Henry Good on this little torn off piece of paper.  Thank you Aunt Arvilla, for saving this and passing it on to me.  You trusted me that I would cherish it as you had done. Today, I am grateful to you for doing so. I have held onto it for over 16 years and now it has proven to be the key to unlocking the mystery of where John Good Senior is buried.

And how for the big reveal--- TA DAH...   Check out the first line on that tombstone!
"JOHN GOOD 1787 -1872"  Here's our Grandpa!  He must have gone to Lycoming Co. to live with his younger son George.  He had  out lived his oldest son, John Jr., who died November 10, 1871 at the age of 63 and is buried in Lower Mount Bethel, Northampton Co. PA.  Younger son, George, only survived old John by a few years.
John Good, Senior lived to be 85 years old, (I know Henry jotted down 87 years, but he was probably doing that from memory.)  This memorial is a great example of multiple family generations recorded on one stone.  Seen here, after John, is his son George and his wife Mary Smith Good.  Next is George's daughter, Josephine, who died at age 24 and her unnamed infant daughter.  Finally, Laura Good Johnson, another daughter of George and Polly Good. 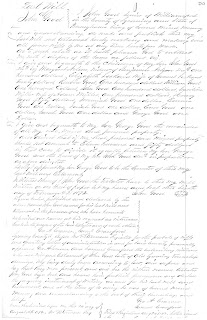 One last thing, I wrote to the Lycoming Co. Historical Historical Society in search of an obituary for the old boy.  They found his will which was probated on August 26, 1872, Will Book number 3, page 533.  Awesome!  In the will John provides for the children of his son John.  One more proof of the family relationship. The Historical Society also told me "we have an original copy of the "Sexton Records and Death Records" of Lycoming county.  In this book, it is detailed that John Good was buried on August 24, 1872 in Wildwood Cemetery in Section 6."

So there you have it.  Sometimes it takes years to put all the clues together.  But I have finally proven the birth and death dates for this ancestor. Here is the link to some early research I collected on John Good Sr. back in 1997.  This family is full of men named Henry, John and George.  I have told the story of  Henry Good (1764-1829) our Revolutionary War Veteran.  Here you have read about his son John, Sr. Our line of descent continues from John, Sr. to John, Jr. (1808-1871) of Lower Mt. Bethel.  From there we have another Henry (1841-1919) of Civil War fame, whose son George was Ron's Great Granddad.

This page  © 2016, Cynthia H. Smith
Send email to chsmith47@yahoo.com
This site may be linked, but not duplicated in any way without consent. The copyright on this page must appear on all copied and/or printed material.


GENEALOGY IS A WORK OF HEART
Your comments and suggestions are appreciated. It is with pleasure that I am able to present this information here for you to see. If you discover a relationship here, I would very much enjoy hearing from you.
Posted by Cynthia Smith on Saturday, September 03, 2016