There is evidence to suggest that the father of Rachel Davis Lloyd who married Henry Lloyd was Eleazer Davis (circa 1735 - ca 1820) of Bedford Co. Pennsylvania.  The rub is, I can't prove it because I have not found that one tidbit of evidence, like a birth record or a mention of her name and his on a document, that would show a relationship between them.  According to John  Simpson Africa, Henry Lloyd, (circa1756 -1820) "settled on the farm which was afterwards occupied by his son Eleazer and which is now the home of his grandson, Henry.  Mr. Floyd Hoenstine, well known genealogist and librarian of Hollidaysburg. Pa. states, "I have examined many Davis wills and biographical sketches, but no where is the name Eleizer found except in the Davis and Lloyd families. And there are at least six of those."   Those two items are the best evidence so far that Eleazer Davis is the father of Rachel. 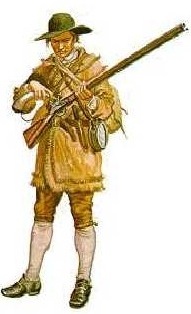 I love the name Eleazer!  He has to be Rachel's father, and even if he isn't he deserves to be recognized for his time and service in the War for Independence.
He was a Ranger, a duty that I imagine he performed throughout the time of the hostilities on the Bedford County frontier.   He is listed on the Pay Roll of  men under the command of Michael Johnson of the  Pennsylvania Rangers in Bedford Co. for 7 months in the year of 1781.   The name of Elizer David is listed with Capt. Boyd's company of Rangers, 20th April, Ano dom. 1781.   The Rangers  were mustered to protect the frontier from frequent and merciless Indian attacks.  Like the minute men of New England they were farmers who answered the call when an alarm was sounded.  It was their job to patrol the perimeter and watch for the approach of the enemy into the settlement.


This Abstract Card shows that he was paid 11 pounds, 4 pence for service in the Bedford Co. Militia.

Eleazer didn't leave a large footprint for his descendents to follow, but we do know from tax records that he had property, animals, a house and family. The following tax assessment  records were found.  In 1783,  Eliazer Davis of Bedford was assessed with one horse, one  lot and one cow for which a  State tax of  0.1.3 and a  county tax of  0.0.3 were paid.  In 1784, Eleazer Davis on the return for Bedford Township is assessed for one dwelling and 3 inhabitants.   Elizer Davis of Bedford paid a state tax of  0.0.8 in 1789.  In the 1790 census for Bedford Twp., Eleazer Davis is listed as the  head of a household consisting of one adult over 16 (self) and three females. It is unknown who his wife was. Church records that would show the names of his children on the occasion of their baptism have not been found by this family historian. His final resting place or gravestone marker for him or his wife have not been located.  There are many unanswered questions regarding the life of Eleazer Davis.  If a reader has information to add to this narrative, I would be delighted to hear from you.

The time period that Rachel Davis  was born is the late 1760's.  She died somewhere between 1820 and 1830.  Birth and death dates for her husband, Henry Lloyd are just as elusive.  He was born about 1756 and died after 1820.  Rachel and Henry were the parents of Catherine Lloyd who  became the wife of William States, of McConnellstown.  Catherine and William States were the parents of Abraham who married Catherine Mumper and they became the parents of Ann Eliza States, my great, great grandmother.  Eliza States married Ben Heffner and had a daughter named Ella Mae who married Rev.  Howard Long.  They had a daughter named Eliza who married Homer McEwen, my grandparents.  Rachel, Rachel, Rachel, I just want to know who your father was.

Source:
Please see this list of all My Revolutionary War Ancestors.
Copyright

This page  © 2016, Cynthia H. Smith
Send email to chsmith47@yahoo.com
All Rights Reserved.This site may be linked, but not duplicated in any way without consent. The copyright on this page must appear on all copied and/or printed material.