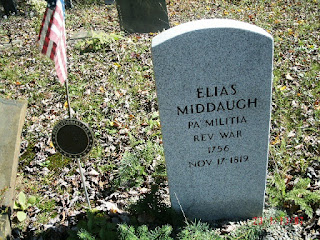 The grave of Elias Middaugh in the Dutchtown Cemetery, Wellsburg, Chemung County, New York is marked with a new monument and flag to honor our Revolutionary Patriot.

His will was probated on the 20th of  November, 1819.  His wife was not named, but the names of his children were given as Phebe, James, Elizabeth, Catherine, Abraham, Urania, Cornelius, Anthony, Mary, Charity, John, and Henry.  The executors for the will were Henry Wells, Esq., and son in law, Isaac Beidleman.

His father was Cornelius Middaugh and his mother, Elizabeth Van Benschoten,  both of Holland Dutch ancestry whose roots were in the Dutch Colony in Ulster Co., New York.   William Henry Van Benschoten  in his book about the Van Benschoten family in 1907  sites that our Elias Middagh married Sarah Van Aken.  The baptisms of three of their children appear in the church record at Mahackemack, now Port Jervis, New York.  One being Elizabeth who was christened on  October 29, 1780.  Elias Middaugh's name appears in the 1772 and 1778 Tax & Exoneration lists in Smithfield Township, Northampton Co., Pennsylvania.  It was during this time that Elias Middaugh provided service in the American Revolution.  The DAR list him as Ancestor #: A202512 and show his record in 1778 as a private 4th class of the 1st Company under Captain Anthony Shymer in the 6th Battalion of the Northampton Co. Militia commanded by Col. Jacob Stroud.  Military records also are found for 1777 and 1781 with the Northampton Co. Militia.

He is still in  Upper Smithfield Twp when he is enumerated in  the 1790 Census, sometime after which he moved on to Newtown, now Elmira, N.Y.  With the end of the Revolutionary War, soldiers began to move westward into territory that was still pretty rugged and on the edge of the frontier. 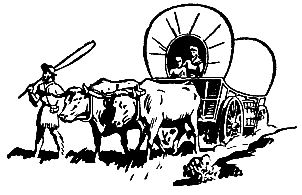 Van Benschoten provides this very interesting account of Elias' half brother, John Van Auken.  "In 1796 John, following the lead two years earlier of his brother in-law, Ludowick Van Demark, emigrated to Phelps, N.Y., brave Margaret carrying in her arms a son three months old. The hardships of the journey were great, what with three small children, household goods and cattle and the wild state of the country traversed. They made the journey with a covered lumber wagon and two yoke of oxen.  Four cows and ten head of sheep journeyed with them driven by one Richard Quick.  As they neared the Susquehanna  and were passing over a ledge of rocks they broke an axle-tree and this had to be replaced. The fording of the streams added greatly to their difficulties, in particular the passing of the Chenango river.  After grievous trouble they made the crossing of that water and came to  Newtown (Elmira) where Gen. Sullivan had fought one of his battles with the Six Nations.   Here Elias Middagh, a half-brother of John, had settled.   With him they rested a few days and then took up the struggle through the wilds again; indeed, wilderness trials beset them until  the head of Seneca Lake was reached."