Also known as and shown in various records as: Johan Georg, Hans Jerg, John George, Jürg, and George, his name is found among the list of foreigners imported in the Bilander, Thistle, Geo. Houston, Commander, from Rotterdam, last from Cowes.   John Georg Lille was on board the Thistle with forty-two men, thirty-six boys, sixty-four women and girls, in all 142 passengers, when they arrived in Philadelphia and qualified October 28, 1738, 250  years ago this week.

His Veteran’s Record of Burial Place Card provides us with a record of his service in the War. It is noted that he served as a substitute for his brother Leonard. 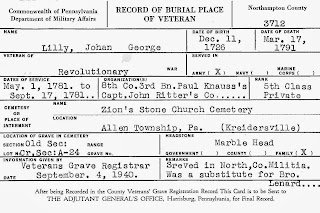 In November, 1738 Johannes George Lilly located in Albany Twp., Berks, County, Pennsylvania where his name later appears on tax lists from that time to 1771.  In 1767 George Llly was assessed in Berks County for 100 acres, 4 horses, 3 cows, and 4 sheep.

He married Anna Margaretha Wenner, a daughter of Hans Nicholas Wenner and his wife Anna Maria, on March 17, 1746 in Albany Twp., Berks, County.  George Lilly was given 20 pounds in the will of his father in law in 1760, Nicholas Wenner.

Johannes George Lilly, made his will out in January, 1780, WB:2:152:1791 Allen Twp.  Executors of the will were Han Stalling and son Leonard Lilly. Named in the will are his wife Anna Margaretha and five sons: Johan Jacob; Leonard; Johann; Michel, and the eldest son Andrew. Also mentioned is deceased daughter, Anna Margaretha who married George Kunkel, her two children to receive her share. The will was proven April 2, 1791 and filed at the Northampton County Courthouse in Easton, Pennsylvania. The will is written in German.

He is buried at Zion UCC Stone Church Cemetery, Kreidersville,  Northampton County, Pennsylvania. While the stone is no longer  there,  his name appears  on a plaque with those of other Revolutionary War Veterans.

George and Anna Margaretha Lilly were the 3rd great grandparents of Estella Kunkle Smith, great grandmother of Ronald B. Smith.