In 1922 the Rufe Family held their 6th annual reunion in Perkasie Park, Perkasie, Pennsylvania.  At that time they wrote that there were  some 1,200 persons on the family register reported to be descended from Jacob Rufe.  Now, almost 100 years later, just imagine now many people are  descended from him today.

THE HISTORY OF BUCKS COUNTY, PENNSYLVANIA, CHAPTER XXXIV, NOCKAMIXON, 1742, by W. W. H. Davis states,  "The Rufe family of this township are descended of  Jacob, originally spelled Ruff, who came from Germany, August 27, 1739. Jacob Ruff, the ancestor, died December 25, 1790, aged 72.   The family are Lutherans, and between 1783 and 1800 at  least five families of the name were connected with the Nockamixon  congregation, all leaving descendants."  What a legacy!

When he was 21 years old,  Jacob Rufe left his homeland in Germany to come to America.  He  arrived in Philadelphia, Pennsylvania aboard  the ship, Snow Betsy, on August 27, 1739, Richard Buden, commander, from Rotterdam and Deal.*

Jacob married Elizabeth and together they become the parents of six sons, John, Jacob, Henry, Christian, George and Frederick, and a daughter whose name was Sophia.  They bought 180 acres of land in Nockamixon township, Bucks Co., Pennsylvania which he farmed.

From the book, A Genealogical and Personal History of Bucks County, Pennsylvania, we learn more about his involvement in the Revolutionary War.  "Jacob was corporal of Captain Jacob Shupe's Company, Bucks County Militia, in 1775 and 1777,  and his sons, John, Jacob, and Henry, were privates in the same company.  This company was one of those  stationed at Bristol, Bucks County, in 1777,  under the command of Colonel Hugh Tomb,  and probably saw active service  in the New Jersey Campaign."

Jacob Rufe is buried in the St. Lukes Cemetery Nockamixon Union Cemetery on Church Hill Road in Ferndale, Bucks County, Pennsylvania. It is noted by several researchers that his wife Elizabeth is also buried there.  Her full name was Anna Elizabeth Speece Rufe.  I have not found additional information about her. 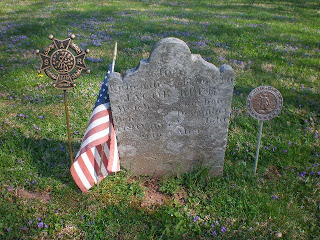 Jacob and Elizabeth's son, John Frederick, or as he was known Frederick,  married Elizabeth Sumstone. Their daughter, Catherine Rufe, married Peter Long and they  were the parents of my great, great grandfather, Mahlon Long.  Mahlon's  granddaughter, Sarah Eliza Long McEwen, was my grandmother.