Our branch of the Porter family arrived in Boston on July 17, 1638.  John Porter, his wife Anna and nine children sailed from England on board the "Susan and Ellen" to start a new life in the New World.   His son Samuel became a mariner and it is thought that he died while on a journey to Barbados.  He made his will before his trip  and did not return.  He left his widow, Hannah and one son John who was born in 1658.  John married Lydia Herrick and became the father of a son named Nehemiah who was born in 1692.  Nehemiah married Hannah Smith. They had  a son also named Nehemiah. He was born on March 22, 1720 which is the date recorded on his tombstone and  was known to his descendants as "Priest" Porter. 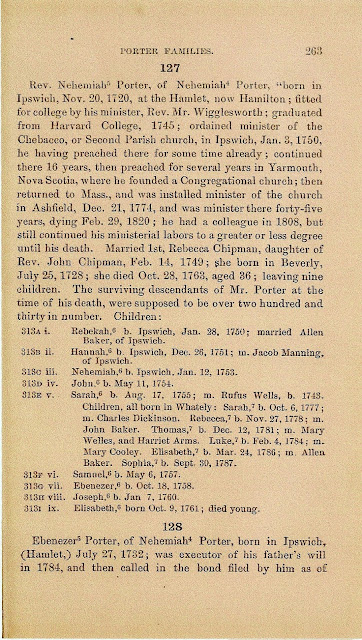 This genealogical sketch of Nehemiah Porter was first published in the book,  A Genealogy of Richard Porter and John Porter by Joseph W. Porter in 1878, which very well may have been the source Zilpha and her sister's used in their research.
Joseph Porter gives his birthdate as November 20 which must be an error.


By 1775  the Porter family had been here for generations.  They were American's and at age 55, Nehemiah strongly felt the need to support the cause for liberty.   As the pastor of the Congregational Church in Ashfield he was first denied permission to join  the ranks of the minute men.

But,  his son John Chipman Porter  tells in his affidavit for his Revolutionary War Pension that his father was at the Battle of Bunker Hill with him in 1775 when he was "taken sick".  John was granted a furlough and was carried  home  to Ipswich by his father  to recover from his illness.

Nehemiah eventually received  permission from his congregation to join the Continental Army.  In 1777 he served in the capacity of chaplain under General Horatio Gates.  He joined the forces on the Hudson River and was with the Continental Army  at the front at Fort Stanwix and  Bennington and at Saratoga when Burgoyne surrendered.

Nehemiah married Rebecca Chipman  on the 14th of February, 1749 in Beverly Massachusetts.  Together they had nine children, but she died  when  the children were all very young.  After Rebecca's death  Nehemiah moved the family to  Yarmouth, Nova Scotia where he founded a Congregational Church.  Sometime around 1771 he returned to Massachusetts and moved to Ashfield.  His second wife was Elizabeth Nowell, whom he married about 1778.

He remained the pastor at the Ashfield Congregational Church for forty - five years.  He continued to preach until he died at the age of 99, on leap year day, February 29, 1820,  just a few  weeks short of his 100th birthday. 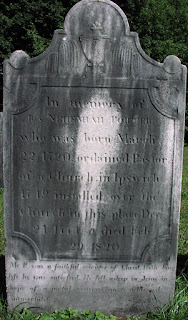 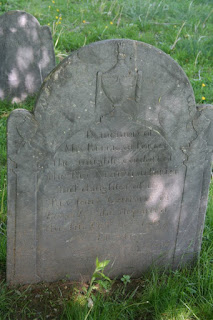 Nehemiah's great granddaughter, Sarah Angeline Chauncey Scott, who  was born two months after he died  inherited his gene for longevity and lived to be 101 years old.