Daniel Weidman is an ancestor in the Smith family tree whose trail has not been easy to follow.  Widman, Wideman, Weidman or Widmon are all spelling variations of the name found in various records. Daniel and his wife Margaret were the third great grandparents of Edna May Frey Good, Ron's grandmother.  Her parents were Isaac and Mary Alice Fangboner Frey.  Isaac's parents were Sam Frey and Sarah Immick, whose grandparents were Tobias Morey and his wife Margaret Weidman, daughter of  Daniel and Margaret.

While an exact marriage date for Daniel Weidman and his wife Margaret Labar has not been found the Records of Christ (Stone) Church, Upper Mount Bethel Township, Northampton County, PA, which include baptisms and communion lists, provide clues to when they were married.  They were both single on September 17, 1786  when Daniel Weidman and Margaret LaBar were listed as sponsors at the baptism of Elizabeth Beck, the daughter of Jacob and Maria Beck. The birth of Anna Maria, daughter of Daniel and Margaret Weidman is not recorded in these records, but her confirmation into church membership is. She is noted to be the 19 year old daughter of Daniel Weidman when she was confirmed on April 4, 1806 making her born in 1787.  Therefore, Daniel and Margaret must have been married circa 1786 / 1787.  The birth records of their other children are all contained in the Records of Christ (Stone) Church, Upper Mt Bethel Twp, Northampton County, Pennsylvania.

When Daniel was 30 his name appears on the 1788 Federal Tax List, Upper Mount Bethel Township, Northampton, PA.   He does not yet own land, horses or cattle, but is charged a tax of one shilling.  He didn't loose any time building up his estate to support his growing family.
Land Warrant 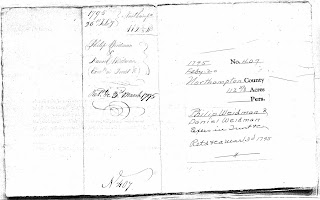 When he died on October 5, 1841 he did not leave a will, but during his lifetime he acquired a sizable amount of land which needed to be disposed.  According to the Recorder of Deeds, Northampton County, Letters of  Attorney, vol 4 pp 62 - 64, Daniel's heirs divided his estate in seven separate transactions. On April 1, 1843, the heirs of Daniel Weidman included his widow Margaret  Weidman; sons, Philip, Ludwig, Daniel and Joseph Weidman and  daughters Mary Ratzel and her husband Jacob,  Margaret Morey  and her husband Tobias,  Magdalena Zeisloft and her husband Jacob,  Catharine Reickert and her husband Samuel, Sarah Oyer and her husband John.  They appointed John Weidman their attorney with the power to convey title to the   property owned by Daniel Weidman.  Our ancestor,  Tobias Morey husband of Margaret Weidman, purchased 5 acres 25 perches, for which he paid $123.75 for a timber lot which was part of the  farm originally owned by Henry Weidman, Daniel's father. Daniel and Margaret lived long and productive lives.  At the time of his death Daniel owned considerable property in Northampton Co. as evidenced by the sale of his real estate in 1843. 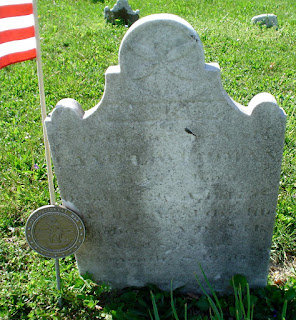 John Humphery, in  Pennsylvania Gravestones, Northampton Co, PA  records Daniel Weidman's birth dates as Oct. 26, 1752.   However,  Tombstones in the Old Cemetery at Stone Church, Penna, transcribed by Atchley and  Atchley in the 1930’s, where he is buried in the Old Union Cemetery gives his birth year as 1758.
His tombstone is difficult to read, but the age  inscribed appears to be 82 years, which would  make the calculated birth year of 1758 more likely.   His gravestone is marked with a flag and medallion to commemorate his service in the Revolutionary War. 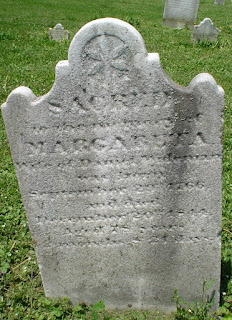 Notice that here on Margaret's gravestone, the name is spelled Wideman.  Margaret was born September 29, 1766 and died December 20, 1844 at the age of 78 years.   She is buried in the Old Union Cemetery in Stone Church, Upper Mount Bethel, PA.  She was the daughter of Abraham LaBar.

The rest of the story:
Earl and  Edna May Good were the parents of Dorothy Alice Good who married Clarence Smith.
Sources:

Please see this list of all My Revolutionary War Ancestors.
Copyright

This page  © 2016, Cynthia H. Smith
Send email to chsmith47@yahoo.com
All Rights Reserved.This site may be linked, but not duplicated in any way without consent. The copyright on this page must appear on all copied and/or printed material.