I can not begin to count the number of times I have driven past this Historical Marker on my way home from Easton. And never did I think that a Smith ancestor played a roll in Sullivan's March. In the DAR Record of Service for Adam Hamsher, Ancestor #A050806, it is noted that he served in the Rear Party for the Sullivan Expedition in 1779.

There is no way I would have  known about our ancestor Adam Hamscher and his Revolutionary War service if it were not for one very important person, Ron's Grandmother, Beatrice Graver Smith. 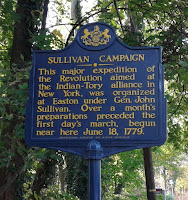 She was our family historian. Beatrice recorded the names and vital statistics of relatives in the pages of her Smith family reunion notebook. She also recorded the linage of her Graver family.  How I wish she were still alive today so that I could ask her  more about these people, but I am thankful for the information that she did record. Because it is her family tree that contains so many of these Revolutionary Patriots about whom I have been writing.

Beatrice provided the name of her grandfather, Ed Graver, who married Elizabeth Trach.  This is where my own research began.  Using the Federal Census records of 1900, 1880, 1870, and 1860, I followed  Edward and Elizabeth Graver back in time until I found young Edward Graver in the 1850 census.  He is listed there as the 15 year old son of John Graver and his wife Bets of Weisport, Northampton Co., PA. Rechecking all of Gram Smith's notes I discovered that she had identified the father of Bets Graver as John Jacob Hower and that Bets was born, Elizabeth Hower.  An internet search for John Jacob Hower pointed me in the direction of the Dreisbach Family Association.  There, I discovered that John Jacob Hower married Magdalena Dreisbach. She was the daughter of John Adam Dreisbach and his wife Maria Margaret Hamscher.  Which brings us the the subject of this post, Adam Hamscher, the father of Maria Margaret Hamscher and a Lieutenant in the Revolutionary War.

Record of his birth is given in the baptismal  records of Gau Heppenheim Evangelical Church in Germany. Adam Hambscher was born on April 18, 1736 and baptized on April 22.  He was the son of Bernhardt Hambscher and his wife Apollonia.  When he was 17 years old he traveled to the New World aboard the ship 'Edinburg' arriving in Philadelphia from Rotterdam on September 14, 1753. He found his way to Montgomery County, Pennsylvania and on November 7, 1758 married Maria Margaret Heckman at the New Goshenhoppen Reformed Church in Upper Hanover Twp., Montgomery Co, Pennsylvania. While his military service records place him in Berks Co., he eventually settled in Northampton County.

Adam Hamscher died in 1809.  His will was dated December 31, 1808 and was probated August 31, 1809 at Easton, Northampton Co., Pa.  He left an estate to his wife, Maria Margaret and equal shares to Daniel, Barnet, Anna Maria, Margaret and Adam, his children.

Sources:
Please see this list of all My Revolutionary War Ancestors.
Copyright

This page  © 2016, Cynthia H. Smith
Send email to chsmith47@yahoo.com
All Rights Reserved.This site may be linked, but not duplicated in any way without consent. The copyright on this page must appear on all copied and/or printed material.
Posted by Cynthia Smith on Friday, November 11, 2016