It is most probable that Henry Lloyd  provided some kind of service to the War for Independence.  The Daughters of the American Revolution shows him credited with Patriotic Service and Civil Service, which means that he signed an oath of allegiance in the DAR file ancestor #A209959.  Mention is made of Henry Lloyd in the affidavit  of John Shaver for pension.  Even though I have found this DAR reference, no card was found on the Revolutionary War Military Abstract Card File,
which would help to substantiate his service.

Henry was likely born in Wales and came to Virginia around 1744 where he married Judith Pemberton and together they had a family of 10 or 11 children.   Of these children, Henry Jr. was born about 1756 and came with his parents to Bedford County, Pennsylvania before 1774.  (Africa) The place where the Lloyds settled later become Walker Township, Woodcock Valley,  in Huntingdon County.

The Lloyd house was described in Direct Tax List of 1798 as a two story  log house, containing eight windows. The house measured 18 by 23 feet with two out buildings: a kitchen and a barn.  An impressive layout for that time and place.

The 1779 tax list for Bedford Co., Pennsylvania for Henry Lloyd shows that he had  500 acres of land,   4 horses,   9 cows,  1 stille (distillery), and   5 negroes.  He is the largest land owner in this list and the only person who owns slaves.  I was surprised to learn that my ancestor was a slave holder.   When Henry came to Pennsylvania from Virginia via a route through Maryland he brought his slaves with him. I found this account in the History of Huntingdon and Blair Counties Pennsylvania – 1883;  "Walker Township Pioneers...  "Henry Lloyd and his wife Judith came from Virginia and brought a number of slaves with them, and settled in the upper part of Woodcock Valley.  The white members of the Lloyd family several times forted at Standing Stone, leaving the Negroes on the farm, as the savages did not manifest a disposition to molest them." (Africa) WOW,  just reading this made me shutter!

I had always thought that Pennsylvania was a free state, but I have learned that it wasn't until 1779 that  Pennsylvania passed the first  law  for abolition.  However, this  law did not  really free any slaves because  a person who was a slave on March 1, 1780, the day the law went into effect, remained a slave until the day they died.  Any children born to  an enslaved woman  after the law took effect would remain slaves until adulthood. It was not until 1847 that total abolition occurred. 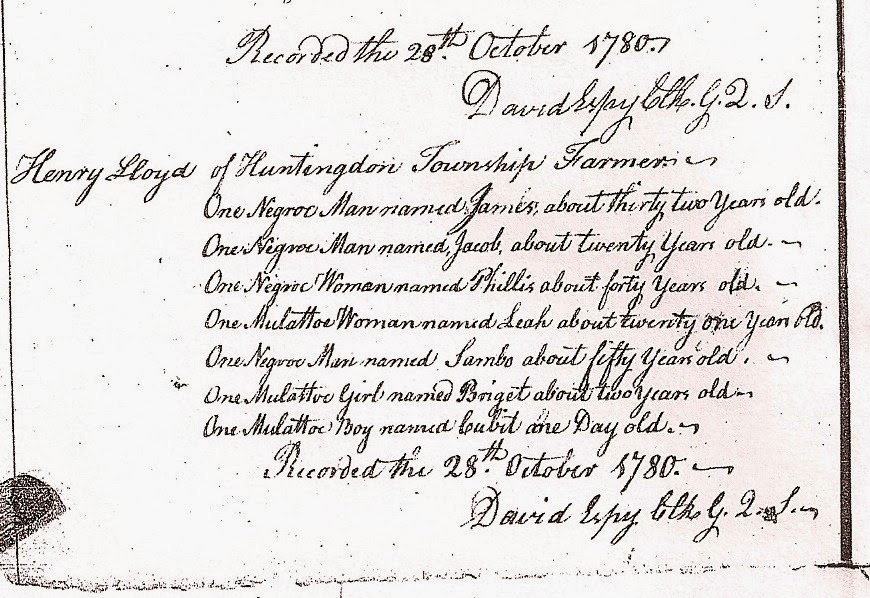 This note shows the registration of the slaves of Henry Lloyd in 1780.  In 1802 the  inventory of Henry Lloyd's estate provides the names of nine slaves.  Africa notes on page 385 that a number of the descendants of the Lloyd family slaves  remained in the county, among them being Morrell's of Porter.

Henry became a large landholder,  as the 1779 tax list for Bedford Co. shows. He also operated a distillery which was most likely used for the making of whiskey.  It was much easier to produce and market whiskey from the grain grown on the land than to take tons of grain to a market.  Henry was a Justice of the Peace.  He died at the age of 93 in 1802 and is buried on the homestead with Judith who died about 1814.  Descendant Richard W. Watson Jr. posted a photo of the gravesite on Find A Grave.

Henry and Judith had a  son named Henry who settled on the farm  and was married to Rachel Davis, of Bedford. Henry was born about 1756 and lived until at least 1820.  He may also have given service in the Revolutionary War.  Henry and Rachel had nine children,  of whom Catherine became the wife of William States, of McConnellstown.  Catherine and William States were the parents of Abraham who married Catherine Mumper and they became the parents of Ann Eliza States, my great, great grandmother.  Eliza States married Ben Heffner and had a daughter named Ella Mae who married Rev.  Howard Long.  They had a daughter named Eliza who married Homer McEwen, my grandparents.


This page  © 2015, Cynthia H. Smith
Send email to chsmith47@yahoo.com
All Rights Reserved.This site may be linked, but not duplicated in any way without consent. The copyright on this page must appear on all copied and/or printed material.
Posted by Cynthia Smith on Thursday, February 12, 2015