It is good to remember those who came before us.  As I write these tributes to my Revolutionary War ancestors, I am amazed to learn of the difficulties they endured in life.  For some, their whole lifetime was marked by turbulent times. It was not easy to live on the frontier back then.  Michael Kressler and his family was no exception.  Imagine hearing reports of marauding Indians  who were attacking and  killing neighbors.  Some of the stories I have read are spine chilling.

There are several records that record the  service of Michael Kressler.  He is credited by some as having served in the Pennsylvania Line and by others for service as a Ranger of the Frontier.  Men who enlisted in the Pennsylvania Line served for at least six months and were prepared to face battle in conflict with the enemy.  Often, as was the case in Northampton County,  special troops called Rangers were recruited to serve long periods of enlistment to protect the frontier against Indian attacks.

“They (the Rangers) were kept continually on the alert, marching to and fro, to protect the country from the enemy who was only known by his sudden burning and murders and escape to the depths of the forest…”  (Knouff)

Kressler's name appears in various lists in The Pennsylvania Archives 5th Series, Volume 8.  On 14 May 1778  Private Michael Cressler, 1st class, appears on the general muster roll of the 2nd Company, 4th Battalion, Northampton County Militia under the command of  Lieu't Co'l.  Nicholas Kern and  Captain George Edelman. p. 367.  On September the 6th, 1780, he is listed as a member of the 4th Class, 8th Company, 3rd Battalion. The Company was commanded by Captain Paul Knauss. pages 240, 241 and 289.  Again on  May the 1st,  1781, Private Michael Kressler,  2nd Class, 8th Company, 3rd Battalion.  p. 249.  These records show us that Michael Kressler was prepared to provide service for the protection of his family and neighbors  throughout  the period of the Revolutionary War. He is recognized by the Daughters of the American Revolution as Ancestor #: A067507 and also by the Sons of the American Revolution, Membership:90643.
Michael was born several years after his father’s arrival here in 1732.  Born in 1740 in Frederick Township, Montgomery Co., Pennsylvania, he was the son of  Hans Philip Kressler.  Michael Kressler (Cressler)  married Elizabeth Halloway on December 6, 1761 at the Old Goshenhoppen Lutheran Church, Northampton Co., Pennsylvania.  They became the parents of  eight children, who were born in Allen Township, Northampton Co., Pennsylvania.  They were:  Phillip, born Sept. 14, 1763; George, born April 24, 1768; John, born April 28, 1771; Valentine, born Feb.1, 1774;  Jacob, born Dec. 20, 1775; Michael, born Aug. 20, 1778; Adam, born May 8, 1781 and  Elizabeth, April 3, 1783. Their births are recorded in the records of the Zion's Stone Church at Kreidersville. 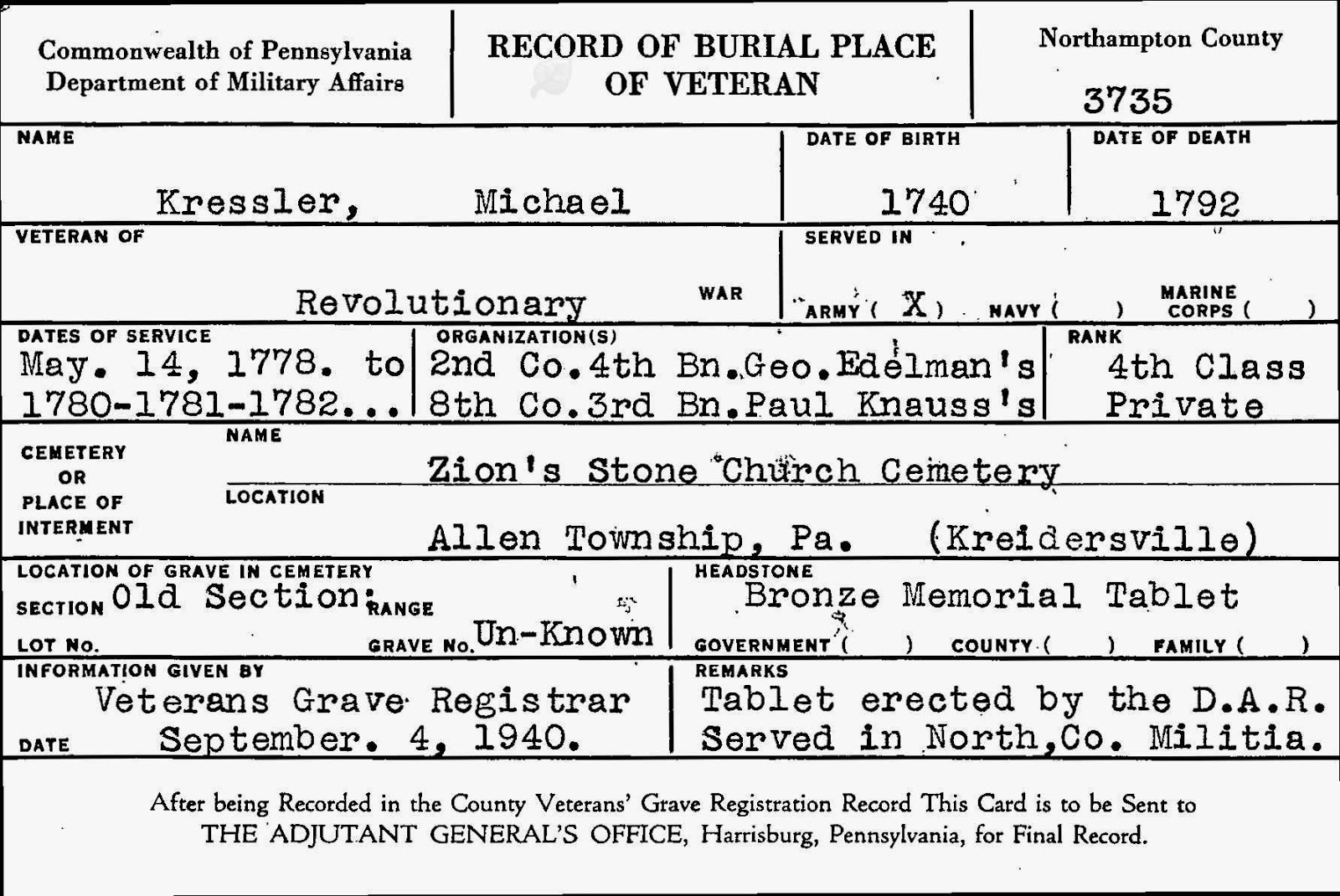 Time has weathered his original tombstone in the cemetery at Zion's Stone Church in Kreidersville, but  a new one was put in place by his descendants in 1984.  His grave is also marked by a bronze Revolutionary War Veterans marker and flag by the DAR.

My great grandmother, Clara Illick McEwen is a descendant of Micheal Kressler.  Her mother was Henrietta or Harriet Kressler Illick, a daughter of John Kressler and Mary Seidel.  John was a son of Jacob Kressler, son of Michael and Elizabeth.  I welcome your comments and would love to hear from anyone descended from Michael Kressler.

This site may be linked, but not duplicated in any way without consent.  The copyright on this page must appear on all copied and/or printed material.