Ever wonder what life was like in a rural area 140 years ago?  My church, Trinity United Church of Christ, is located in Centerville. Many of my ancestors hail from Northampton County, Pennsylvania and the area surrounding Centerville in Upper Mt.  Bethel Township.   So when this newspaper clipping was recently given to me, I found the musings of the unknown poet to be very interesting indeed.    It was originally published in the Easton Argus on May 6, 1874, but there is no date given or paper identified for this reprint of the poem, "Ho, For Centerville".  The poem talks of people and places in the village of Centerville, also known as Stone Church, located in Upper Mt.  Bethel Township, Northampton Co., Pennsylvania.

O! say shall I tell you about Centerville,
How it's built partly in a vale and partly is on a hill,
We have a stream but too small its mission to fill,
Consequently we have no factory, neither a mill.

A tannery to tan our leather we have got,
It tans when its cold and it tans when its hot,
We have an enterprising shoemaker always in his shop,
Ready to accommodate lady, gentleman or fop.

One hotel we have, in dimensions it does well,
For accommodations you must stop and then you can tell,
A blacksmith we have got of him I must tell,
That he shoes our horses and does it well.

Three preachers we have of churches the same,
But the way they quarrel and fight tis a public shame,
If we haint all good Christians I wonder who's to blame,
For the sinner stands aloof in this senseless church fighting campaign.

Of old maids, it beats all creation who are wishing for another occupation,
We have nearly enough to supply a foreign nation,
Of widows we run still higher in multiplication,
For we have enough to supply the centennial with a donation.

We have a jolly fat doctor, somewhat resembling a Quacker,
Two or three school teachers and a lively undertaker,
One neglected school house, standing on half an acre,
One spavined old politician and an axe handle maker.


Two milliner shops one sees as he passes
They vie with each other in fitting up our lasses,
Two stores we have that sell dry goods to the masses,
And a curly-headed clerk to measure out molasses.

We have three society meetings in all,
The Odd Fellows, Mechanics and Grangers all meet in one hall,
Our squire in office haint so very tall,
But then he runs a store beneath it all.

A ladies fair and festival the first week in July we are promised, that's one thing,
On the fourth, speeches, fireworks, fantastic parade and balloon ascensions and other things,
At the head of all this is our stone-cutter, the patriotic tea-come ton,
For the people to enjoy themselves he always gets up some fun.

The fame of Pompeii and the glory of Rome,
With us can't compare, when we're all at home,
About one hundred and fifty souls in number can be shown,
By counting street-trotter, store-lounger, gambler, blosard, worker and drone.
PONTIAC.


Undated postcard  of Stone Church, PA also known as Centerville. This photo is looking south.            The map below shows Centerville from the opposite direction. 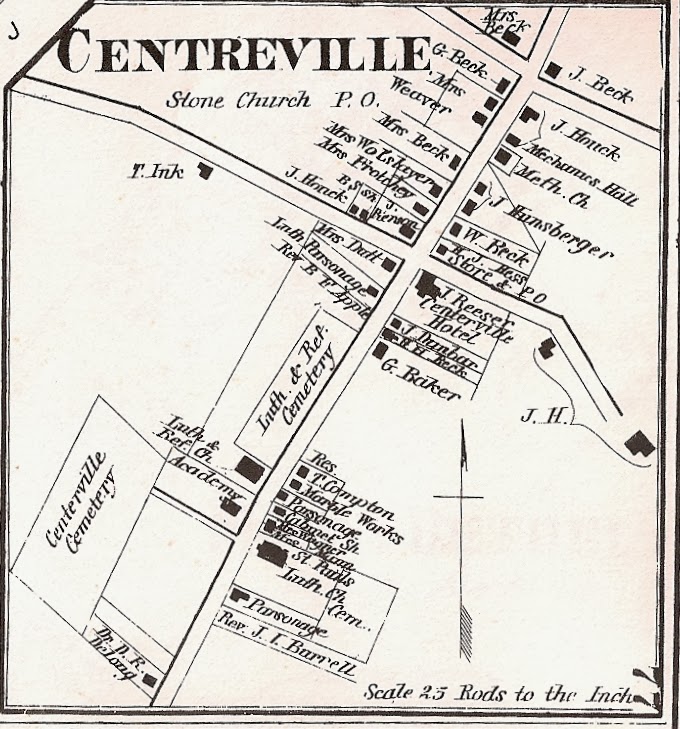 This Map of Centerville was taken from the  Atlas of Northampton County, Pennsylvania, 1874.  The Atlas was reprinted by the Northampton County Historical and Genealogical Society in 1990.  Look closely at the map and you will see the names of home owners in town, the churches and various places of business.  Trinity United Church of Christ, known as Christ Reformed back then,  is identified as Luth. & Ref Ch. (Lutheran and Reformed Church) on the map. The Luth. & Ref. Cemetery is now known as The Old Union Cemetery.  A list of the burials in the Old Union Cemetery can be found here.  St. Paul's Lutheran Church is now a private home. The Methodist church burned down and Christ Lutheran Church was built in 1910 where the Centerville Hotel is located on the map. 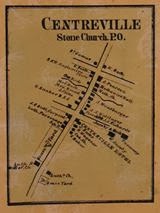 Recently found an article from The Morning Call , December 25, 1994,  by Denise Reaman.

This site may be linked, but not duplicated  in any way without consent.

The copyright on this page must appear on all copied and/or printed material.